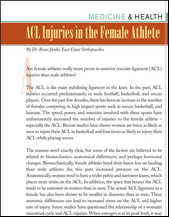 ACL Injuries in the Female Athlete

Are female athletes more prone to anterior cruciate ligament (ACL) injuries than male athletes? Over the past few decades, there has been an increase in the number of females competing in high impact sports such as soccer, basketball and lacrosse.

The ACL is the main stabilizing ligament in the knee. In the past, ACL injuries occurred predominantly in male football, basketball, and soccer players. Over the past few decades, there has been an increase in the number of females competing in high impact sports such as soccer, basketball and lacrosse. The speed, power, and intensity involved with these sports have unfortunately increased the number of injuries to the female athlete  – especially the ACL. Recent studies have shown women are twice as likely as men to injure their ACL in basketball and four times as likely to injure their ACL while playing soccer.

The reasons aren’t exactly clear, but some of the factors are believed to be related to biomechanics, anatomical differences, and perhaps hormonal changes. Biomechanically, female athletes bend their knees less on landing than male athletes do; this puts increased pressure on the ACL. Anatomically, women tend to have a wider pelvis and narrower knees, which places more strain on the ACL. In addition, the space that houses the ACL tends to be narrower in women than in men. The actual ACL ligament in a female has also been shown to be smaller in diameter than in men. These anatomical differences can lead to increased stress on the ACL and higher rate of injury. Some studies have questioned the relationship of a woman’s menstrual cycle and ACL injuries. When estrogen is at its peak level, it may potentially have a relaxing affect on the ACL, placing it at increased risk of rupture during that phase of their cycle.

Although we cannot change a female athlete’s anatomy or hormonal cycle, research has shown performing special exercises that focus on balance, body and joint awareness, and muscle strengthening techniques can decrease the risk of injury. ACL injury prevention programs should be implemented to benefit both women’s health and the general health of the public.